Peter Epstein of Epstein Research explains why he sees this company as an attractive way to play uranium in 2019.

Azarga Uranium Corp. (AZZ:TSX; AZZUF:OTCQB) is an integrated uranium exploration and development company that controls 11 uranium properties / projects / prospects in the U.S. (South Dakota, Wyoming, Utah and Colorado) and in the Kyrgyz Republic, with a primary focus on in-situ recovery (ISR) projects in the U.S. The Dewey Burdock ISR uranium project in South Dakota is the flagship project.

Azarga Uranium’s main asset, the Dewey Burdock ISR uranium project, possesses a sector-leading combination of grade and scale for an ISR project in the U.S. and has been obtaining key regulatory approvals over several years. However, during most of this time, uranium prices were very weak, only recently rebounding to ~US$29/lb, before pulling back a bit to ~US$26/lb currently. The spot price was as low as ~US$17.50/lb in the 4th quarter of 2016.

I caught up with the CEO of Azarga Uranium, Blake Steele, in New York and had the opportunity to discuss Azarga Uranium and the broader uranium sector. In short, he noted that interest in uranium and uranium juniors was high, especially for U.S. juniors due to the Section 232 Petition sitting with the Department of Commerce. Azarga Uranium’s recently completed financing would seem to validate this. Azarga Uranium easily raised C$3.0 million, the bulk of which was taken up by institutions, further validating the quality of the company’s assets. The company is well funded.

Recall that the Section 232 Petition review is reaching a key date in April in which the Dept. of Commerce recommendation is expected and the market could receive news. Attention is building. The crux of the issue is that U.S. imports of uranium from state-owned / state-subsidized enterprises. Russia, Kazakhstan & Uzbekistan reportedly fulfill ~40% of U.S. demand, while domestic production in 2019 might be as low as 1%! In 2018, U.S. uranium production was between 1-2% of the roughly 45 M pounds consumed by U.S. utilities.

The Section 232 Petition seeks to reserve 25% (a quota) of the U.S. nuclear market for U.S. uranium production only. That equates to ~11 M pounds/yr. To Blake’s credit, he did not guarantee a positive Section 232 outcome, but he did note that the Company is well positioned regardless of the outcome. He added that some investors felt that no matter what happens, the lifting of the uncertainty should get utilities off the fence and back to the table for long-term contract negotiations.

Uranium Fundamentals as Strong as Ever

The nuclear reactor pipeline exceeds pre-Fukushima levels. Given substantial supply cuts that have occurred since 2016, with more cuts to come, and some mines coming to the end of their lives—primary uranium production could fall short of global consumption by ~40 million pounds this year.

“Globally, supply has been slashed. Producers have eliminated more than 35 million pounds of mined supply since 2016. In conjunction, utilities have been “under buying” in recent years running down stockpiles and contract positions. All the while, demand in the sector is growing with the global reactor pipeline exceeding pre-Fukushima levels. Companies such as Cameco have shut down mines and are buying large volumes in the spot market.”

Current uranium prices present an unsustainable situation, especially with Cameco and financial buyers buying in the spot market. Yellow Cake PLC reportedly acquired 8.4 million pounds to stockpile. Cameco has shut down its largest mine and is buying 11–15 million pounds in the spot market this year to fulfill its contracts. In my opinion, Cameco could be buying spot again next year if prices remain below the low US$40s/lb.

Blake thinks prices are headed higher in 2019 and subsequent years. There’s been talk of a psychological barrier at US$30/lb that has to be overcome. Some think that once US$30/lb, is breached, US$35/lb could come soon after. I believe that if US$35/lb is reached in the next 12 months, select uranium companies, including Azarga Uranium, will see their share prices move meaningfully higher.

Azarga Looks Attractive, With or Without a Section 232 Windfall

For Azarga, I continue to look at it as a free option on a good Section 232 outcome (which is hard to define or quantify!). I also believe that the probability of a takeout of the company has increased, and importantly, that the universe of prospective acquires has expanded. That’s pretty compelling as far as near-term catalysts go. If there’s a 25% quota coming, owning a U.S. near-term producer would be like printing money. 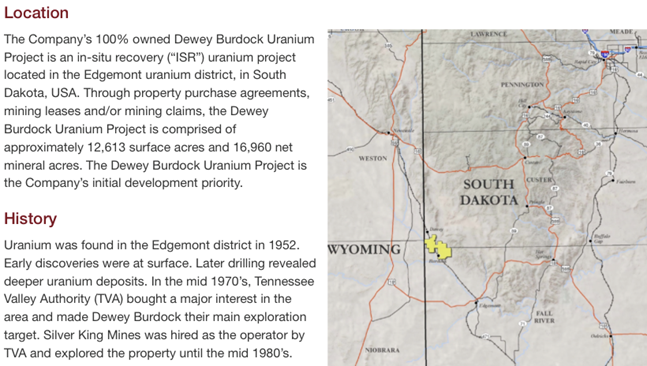 Bottom line, let’s just say that Azarga is 12 months from final approvals, it could then raise capital, perhaps with a strategic partner, and construct an ISR mine. The cap-ex needed is only US$27 million. Azarga could be in initial production in 2021. Possibly having contracted for 5–10 years in a Section 232 setting, where a bifurcated market has U.S. sourced uranium trading at a premium. Further, in 2021, the U.S. would be short of its ~11 million pound quota, so Azarga could potentially ramp up production in the early 2020s more rapidly than it otherwise would.

In the meantime, let’s not forget that Azarga is well financed and expected to receive a total of US$5.5 million = C$7.3 million by December 31, 2020, on a non-core asset deal. This is a very significant amount of non-equity funding through next year.

And, let’s not forget that Azarga delivered an increased mineral resource estimate of 17.8 million pounds on its flagship Dewey Burdock project alone. Combined with other positive developments, such as a lower U.S. federal income tax rate (21%), it offers the potential to meaningfully enhance the economics in an upcoming revised PEA. Importantly, the additional mineralization falls within the existing NRC license boundaries.

And, let’s not forget that Azarga merged with URZ Energy last year. The combined company has ~39 million pounds of Measured & Indicated resources in the U.S. Assets in the U.S. are increasingly important given the Section 232 initiative mentioned above. Adding URZ’s pipeline of assets, including Gas Hills, was a natural fit. The larger combined company is now better suited to acquire additional Western U.S. uranium assets. 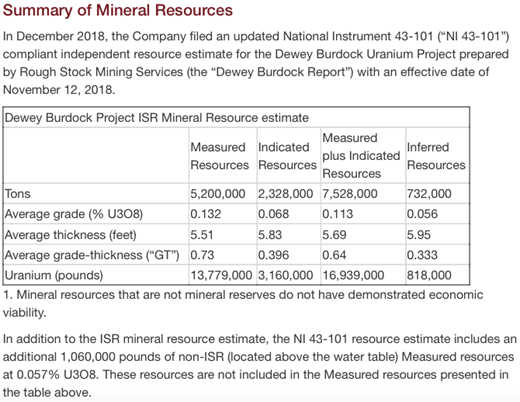 All and all, Azarga Uranium (TSX: AZZ) / (OTCQB: AZZUF) seems like an attractive way to play uranium in 2019.

Read what other experts are saying about:

Disclosures: The content of this article is for information only. Readers fully understand and agree that nothing contained herein, written by Peter Epstein of Epstein Research [ER], (together, [ER]) about Azarga Uranium, including but not limited to, commentary, opinions, views, assumptions, reported facts, calculations, etc. is to be considered implicit or explicit investment advice. Nothing contained herein is a recommendation or solicitation to buy or sell any security. [ER] is not responsible under any circumstances for investment actions taken by the reader. [ER] has never been, and is not currently, a registered or licensed financial advisor or broker/dealer, investment advisor, stockbroker, trader, money manager, compliance or legal officer, and does not perform market making activities. [ER] is not directly employed by any company, group, organization, party or person. The shares of Azarga Uranium are highly speculative, not suitable for all investors. Readers understand and agree that investments in small cap stocks can result in a 100% loss of invested funds. It is assumed and agreed upon by readers that they will consult with their own licensed or registered financial advisors before making any investment decisions.

At the time this interview was posted, Peter Epstein owned stock options in Azarga Uranium and the Company was an advertiser on [ER]. Readers understand and agree that they must conduct their own due diligence above and beyond reading this article. While the author believes he’s diligent in screening out companies that, for any reasons whatsoever, are unattractive investment opportunities, he cannot guarantee that his efforts will (or have been) successful. [ER] is not responsible for any perceived, or actual, errors including, but not limited to, commentary, opinions, views, assumptions, reported facts & financial calculations, or for the completeness of this article or future content. [ER] is not expected or required to subsequently follow or cover events & news, or write about any particular company or topic. [ER] is not an expert in any company, industry sector or investment topic.