As crude prices are pushing up against $40 per barrel, defying many bearish predictions from the first quarter, McAlinden Research outlines optimistic prospects for the market.

Crude prices are pushing up against $40 per barrel, defying many bearish predictions from the first quarter. Output cuts in nearly all major oil producing nations have been effective thus far and can be expected to continue through at least July. Even after the supply cut deals expire, however, crude producers are now forecast to cut hundreds of billions of dollars in spending on expansion for years to come, which should provide support to longer-term pricing prospects. It is important to note that U.S. production capacity from shale producers also remains vulnerable with many drillers still staring down the barrel of bankruptcy.

Crude Demand Digging Out of the Depths

In its monthly oil-market report Tuesday, the International Energy Agency (IEA) said that while the world’s demand for crude will drop by 8.1 million barrels per day (bpd) this year, slightly less than forecast in last month’s report, demand in 2021 will rebound by a record 5.7 million bpd. Stripping out jet-fuel demand, global oil demand should reach pre-crisis levels in mid-2021, the IEA’s executive director Fatih Birol said Tuesday. “The key issue is when people will start to fly,” he said, adding that “if there is a solution to the coronavirus problem and the economy rebounds as foreseen, we may well see in the near term oil demand go back to pre-crisis levels.”

To receive all of MRP’s insights in your inbox Monday–Friday, follow this link for a free 30-day trial. This content was delivered to McAlinden Research Partners clients on June 17.

This is huge news for the energy sector, which has already begun to see early signs of recovery. Not only have crude prices rebounded to their highest level since early March, now closing in on $40 per barrel, but gasoline prices are also climbing back up. Earlier this month, we highlighted rebounding traffic volume in the U.S., but some experts now say that the reopening of many states will lead to more cars being on the road than before the outbreak of COVID-19.

Fear of contagion from the virus is expected to push up the number of people forgoing public transit for their commute and other travels. A recent survey from research outfit Elucd found that 44% of New Yorkers, for example, will avoid public transit after quarantine ends, and that another 31.5% plan to use mass transit less by walking, driving or biking. Nationwide, the poll found that 45.8% of people will “avoid transit entirely.”

China, Europe and other areas around the globe are experiencing the same phenomenon, which should be a boon to gasoline sales for months to come.

Speaking of China, by far the world’s largest importer of oil, the country’s April crude demand was almost back at levels seen a year previously. In May, the Chinese imported a record amount of oil. Shipments to China surged to 47.97 million tons in May, or 11.34 million bpd. That’s a 15% jump from April and 160,000 bpd more than the previous record set in November. Shipping data indicates that China could import more than 14 million bpd in June, according to Sean Tan, an analyst with commodity research firm Kpler.

Oil production from the seven most prolific U.S. shale basins will fall to 7.632 million bpd, the Energy Information Administration (EIA) said on Monday in its latest edition of the Drilling Productivity Report. That would be the lowest level of production in two years as all of the seven basins are expected to see some drop off in July.

Though the cuts have helped oil prices have rebound from their lows, reaching previously unthinkable negative levels in April, profitability is still hard to come by for struggling drillers. This means time and money are running out for a number facing insolvency.

Back in April, Rystad Energy had warned that, in a $20 oil environment, 533 U.S. oil exploration and production companies would file for bankruptcy by the end of 2021. At $10, there could have been more than 1,100 bankruptcies. Though it looks like shale drillers have avoided those worst-case scenarios, many still face an insurmountable amount of debt going forward. MRP previously noted that more than $200 billion of North American oil-and-gas debt will mature over the next four years, including $41 billion just this year. That total will increase to $45 billion next year and then balloon to $68 billion in 2022.

Per the latest Rystad data, if U.S. oil prices average about $30 this year, around 73 oil and gas producers in the U.S. will still face bankruptcy, with 170 more following in 2021. Oil is hovering safely above that mark for now, but the threat of bankruptcy, along with lack of financing options, should prevent many shale drillers from taking any measures to increase output in the near term.

MRP has highlighted the inability of U.S. shale producers lack of cash flow going all the way back to 2018. While plentiful capital injections were easy to come by back then, banks and other creditors continue to slash credit lines. Moody’s Corp. and JP Morgan Chase & Co. forecast a total reduction of as much as 30% to the asset-backed loans, or tens of billions of dollars.

As the Wall Street Journal writes, some are concerned that the cutback in lending could signal a permanent contraction in oil-and-gas lending, as financial institutions, already facing pressure from activists and governments to pull back from fossil fuels, retreat from a sector that has delivered underwhelming profits for most of the past decade.

Though Goldman Sachs is predicting a V-shaped bounce back in oil demand, supply will exhibit an L-shaped recovery. Effectively, the Investment Bank expects supply to be suppressed for some time as, not only does shutting in oil wells damage their output capacity and take work to get them back online, but declines in capital expenditure and access to capital will suppress new exploration and drilling for some time.

The IEA sees a similar struggle to regain potential capacity from before the pandemic. The agency now expects total energy investment to fall from $1.9 trillion to $1.5 trillion, a 20% decline in 2020 compared to last year—the largest decline on record. Upstream investment has been struck particularly hard, expected to drop from $483 billion last year to $347 billion this year; that’s a drop of almost one-third. If oil sector investment were to stay at these projected 2020 levels, this would reduce the previously expected level of supply in 2025 by almost 9 million bpd.

Last month, MRP noted that the potential of muted investment levels and new project activity could combine with the rebound in global oil demand once the coronavirus crisis is over to swing the global oil market into a potential oil supply deficit of some 5 million bpd, according to Rystad data. Oil prices would top $68 a barrel to balance the market, the consultancy said.

Saudi Arabia reduced the amount of crude it will supply next month to seven refiners in Asia after striking an extension on their OPEC+ deal, which will now be in effect through July. The volume of contracted oil the seven buyers will receive for July was cut by 10% to 40%, according to refinery officials who asked not to be identified as the information is private.

The OPEC+ syndicate, which is unofficially headed by the Saudi Kingdom and non-OPEC member Russia, will remain committed to maintaining production cutbacks amounting to about 10% of global supply.

Surprisingly, Venezuela’s collapsing oil industry, in a constant state of decline for years now, has largely flown under the radar as of late despite being at its absolute breaking point. As fields across the nation shut amid a relentless U.S. campaign to cut the country off from global oil markets, World Oil writes that the number of rigs drilling for crude fell to just one in May, according to data from Baker Hughes. Another lone rig was drilling for gas. That marks a 96% decline since January, when drilling fell to levels not seen since 1963. State-owned PDVSA’s total oil production decreased 16% to 645,700 bpd last month—that’s 57% lower than the company’s previously planned output.

We continue to believe early supply-side measures taken by oil producing nations has been effective in taming the global crude supply, holding the market over until sufficient demand can return. We also believe that the most well-positioned firms to withstand the intermediate period will be large-scale operators with diversified, productive assets.

MRP added LONG Crude Oil & U.S. Energy to our list of themes on April 7, 2020. We will continue to track these themes with the United States Oil Fund, LP (USO) and Energy Select Sector SPDR Fund (XLE). Since we launched the themes, the USO is has unsurprisingly declined a steep 32% in the aftermath of the April meltdown in the futures market. However, the XLE has actually garnered a 28% return over the same period, outperforming the S&P 500’s 18% gain. 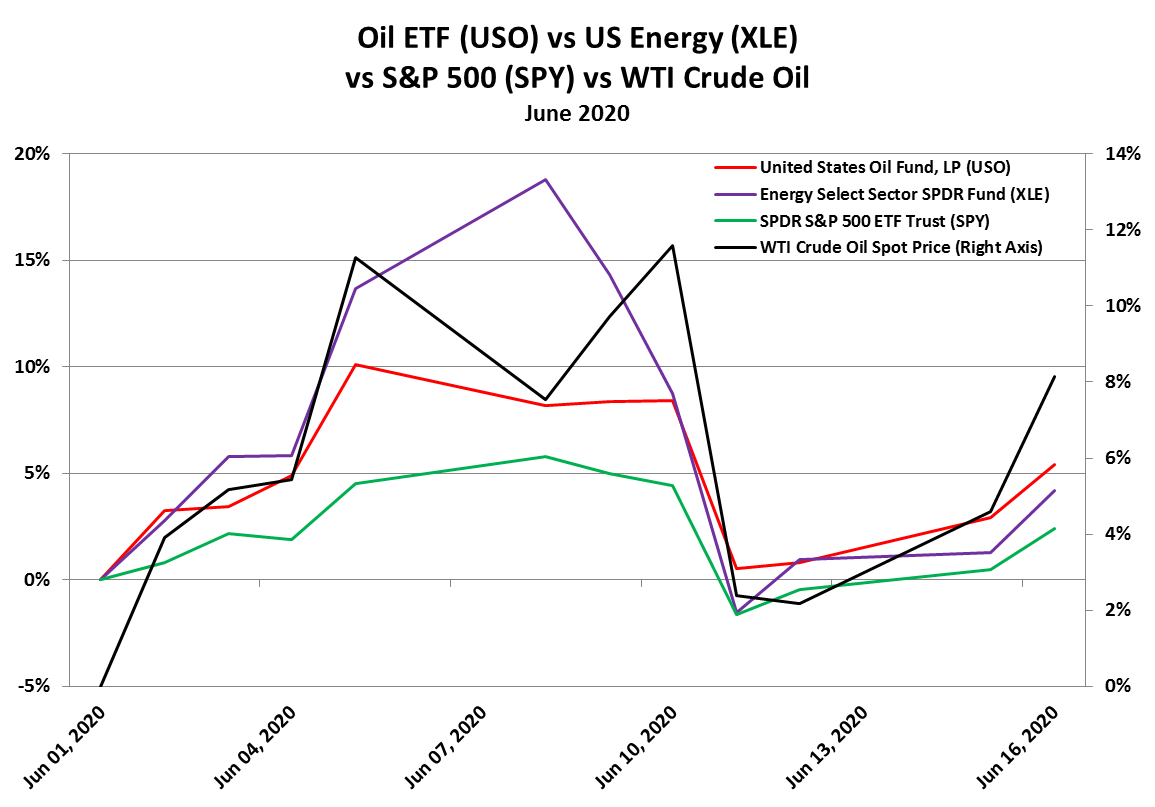 McAlinden Research Partners (MRP) provides independent investment strategy research to investors worldwide. The firm’s mission is to identify alpha-generating investment themes early in their unfolding and bring them to its clients’ attention. MRP’s research process reflects founder Joe McAlinden’s 50 years of experience on Wall Street. The methodologies he developed as chief investment officer of Morgan Stanley Investment Management, where he oversaw more than $400 billion in assets, provide the foundation for the strategy research MRP now brings to hedge funds, pension funds, sovereign wealth funds and other asset managers around the globe.

McAlinden Research Partners:
This report has been prepared solely for informational purposes and is not an offer to buy/sell/endorse or a solicitation of an offer to buy/sell/endorse Interests or any other security or instrument or to participate in any trading or investment strategy. No representation or warranty (express or implied) is made or can be given with respect to the sequence, accuracy, completeness, or timeliness of the information in this Report. Unless otherwise noted, all information is sourced from public data.

McAlinden Research Partners is a division of Catalpa Capital Advisors, LLC (CCA), a Registered Investment Advisor. References to specific securities, asset classes and financial markets discussed herein are for illustrative purposes only and should not be interpreted as recommendations to purchase or sell such securities. CCA, MRP, employees and direct affiliates of the firm may or may not own any of the securities mentioned in the report at the time of publication.