Delrey Metals Corp.’s (DLRY:CSE; 1OZ:FSE) mandate is to create shareholder value by sourcing, financing and developing undervalued strategic energy metals properties and projects through staking ground or making accretive, prudently and creatively financed acquisitions and joint ventures/farm-ins. It’s off to a good start and has a clean balance sheet with just 34 million shares outstanding and cash of ~C$1.5 million. The market cap is about C$8 million = US$6.1 million. The company is aggressively pursuing additional strategic energy metals assets, and have homed in on two or three in particular.

Delrey Metals has acquired five highly prospective properties in Canada. Four are prospective for vanadium, for a total of 9,482 hectares, and one is a cobalt–copper-zinc opportunity that Cobalt 27 Capital Corp. acquired a 2% NSR on. All four vanadium assets will be receiving airborne magnetic surveys and geophysics in February. Subject to results, management will determine which properties to focus on. Both the Porcher and Blackie properties have unique features that if confirmed, will likely make them top priority targets for the next phase of exploration.

Interest in vanadium has grown along with the price. Demand from China continues to be the key driver. While the rest of the world grows at 2%–3% per year, a bad year for China is +6%, and it’s the second largest economy on the planet. Not only does China use a tremendous amount of steel, it uses huge quantities or rebar, which is used in construction and infrastructure building (and rebuilding).

Regarding vanadium pentoxide pricing, there’s been a lot of angst over the recent dramatic decline, but Chinese prices seem to be settling in around US$17/lb. The chart above shows a price closer to US$15/lb, but the price was US$16.90/lb as of February 3rd. It topped out at nearly US$35/lb in November, so the price has been halved from a 13-year high. Importantly, US$17/lb is still a strong price, up from a low of US$2.35/lb on 12/31/15. From $2.35/lb, the Chinese vanadium pentoxide price has risen at a 3-year CAGR of ~93%. A price between US$15–US$25 is a sweet spot, too high a price and VRBs get priced out of the market.

Vanadium is primarily used (91%) to strengthen steel rebar (two pounds of vanadium added to a tonne of steel doubles its strength); last year China came out with new regulations for Chinese rebar makers– use more vanadium! However, reportedly, 30%–40% of Chinese rebar producers did not follow the regulation implemented in November, which was likely a big factor in the vanadium price crash. The increased demand from this initiative alone is estimated at 10,000 tonnes per year. That’s on a global market of about 90,000 tonnes. 10,000 tonnes/year is what Largo Resources’ main mine in Brazil produces, one of the largest mines in the world. 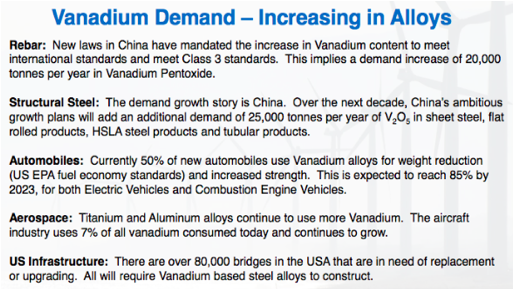 Global demand for vanadium is also being enhanced by other internal moves in China, most notably a total ban on the import of slag and scrap (waste products) that contain vanadium. These waste streams had been used as feedstock for vanadium producers in China. The ban is expected to reduce domestic Chinese production by ~5,000 tonnes/yr.

Quickly on the supply side there have been mine closures dating back to 2015 that are impacting the market. In 2015 a major Brazilian company liquidated, closing the Evraz Highveld mine, representing 10%–15% of global vanadium production. However, at the time the inventory of vanadium was high, so there was a limited price reaction.

Fast forward two or three years, there have been other smaller mine closures in China and Brazil, and the above mentioned increase in demand, causing vanadium inventory to be drawn down substantially. Therefore, both sustained demand drivers and ongoing supply constraints help explain the price move from $2.35/lb at the end of 2015 to a peak of nearly US$35/lb in 4th quarter 2018. 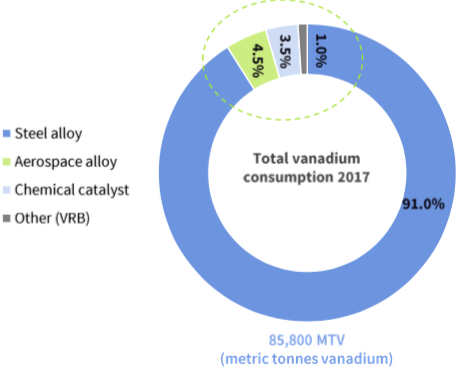 And then there’s Vanadium Reflux Flow Batteries (VRBs). They represent just ~1.5% of the global vanadium market, but some pundits have large, grid-scale energy storage growing at a CAGR of up to 40%. Roskill forecasts vanadium use in VRBs to be 31,000 tonnes by 2025. If true, VRBs would be a significant demand driver, easily overtaking the uses in aerospace and chemical catalysts combined.

2019 could be a sweet spot in vanadium pricing; several experts expect prices in the US$15/lb to US$25/lb range. That would sustain bullish sentiment for companies with properties outside of China, Russia and South Africa. Delrey Metals has exactly that, five early-stage prospects in Canada, all with decent infrastructure, all situated on past producing mining or logging sites, and most important, all having had historical work. Prior work included magnetic and other surveys, soil sampling, surface samples, concentrates were made from some samples, and a drill program (at the Star property). 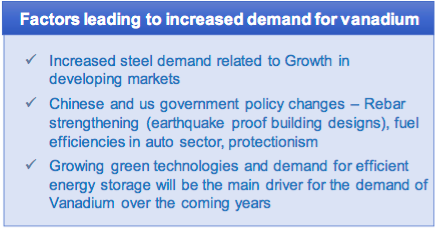 The Blackie Vanadium property is in west-central British Columbia, ~96 km south-southwest from Prince Rupert. The property is on Banks Island and is accessible year-round. It is located on tidewater, accessible to the Prince Rupert deep water port, which allows for an eight-day trip to North American West Coast ports. There’s a network of logging roads (