Peter Epstein of Epstein Research explains why he believes this company stands out from many of the lithium explorers in Argentina.

Portofino Resources Inc. (POR:TSX.V; POT:FSE) is a high-risk lithium junior with three brine projects in Catamarca province, Argentina. I say “high risk,” but that should go without saying. All lithium juniors are high risk. There are 13–14 publicly listed, pre-PFS (prefeasibility study) stage companies (Neo Lithium has completed a PFS, Millennial Lithium is expected to deliver a BFS in August) with all, or substantially all, of their properties in Argentina.

But, how many of those companies are proactively moving forward? How many have good projects? Which companies still have to make substantial cash payments to complete acquisition(s)?

Portofino is clearly moving the ball forward on two of its three projects, and it does not owe a lot of money to property vendors. Although it’s too early to know if the company has good assets, one of its two main projects, Hombre Muerto West (HMW), is in the single best salar in Argentina—Salar del Hombre Muerto.

Last year, 18 near-surface samples were taken, plus two duplicates, on the two concessions that total 1,804 hectares. The top three samples averaged 906 mg/L Li and had a low average Mg:Li ratio of 1.8 to 1.

Neighbors in and around Hombre Muerto include Livent Corp. (formerly FMC), Korean giant POSCO and Australia-listed Galaxy Resources. Within the past six months, POSCO paid ~$364 million to Galaxy for 17,500 hectares, that’s ~$20,800/ha—a figure 187 times greater than the $111/ha Portofino trades at (see chart below). That land package reportedly has a 2.54 million tonne LCE Indicated + Inferred resource.

I’m not suggesting that Portofino’s three project areas are worth north of $20K/ha, not even close, but if management delivers good drill results at HMW, there’s likely ample room for improvement in the company’s valuation.

The average ratio of Enterprise Value to property size (excluding AGY.ax, POSCO, Lithium X, POR.v and LIT.v) is $651/ha, six times that of Portofino. I excluded AGY.ax & LIT.v as outliers. That average of $651/ha is going to move higher as several companies drop land packages in the next 6–12 months.

In a better lithium juniors market, Portofino would be a prime takeout target…

At least 13 companies, POSCO, Galaxy, Livent, Lithium Americas, Ganfeng, Albemarle, Orocobre, Neo Lithium, Argosy Minerals, Millennial, Advantage Lithium, Lake Resources and Galan Lithium, have a strategic reason to be watching Portofino’s progress at Hombre Muerto closely. Acquiring Portofino could be a cheap option on three projects that, while not proven, have not been disproven either.

Having properties in and around salars that have not hosted poor drill results is of paramount importance. Many of the salars in Argentina that were explored in 2017 and 2018 ended up the subject of poor, very poor or merely mediocre drill results. 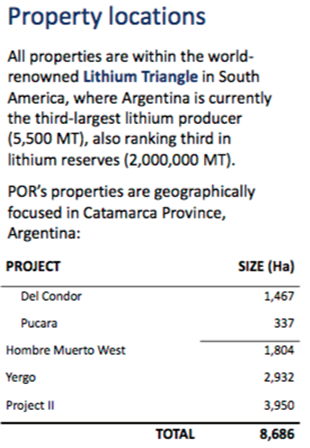 For example, Salar de Pocitos was drilled by Pure Energy Minerals and Liberty One Lithium, neither company had any luck. Salar de Arizaro was drilled, the assays showed low-grade Li with high levels of magnesium. Other salars certainly fall into this category, no-go zones, at least until the next lithium bull market!

If one believes that lithium prices and investor sentiment will rebound, exact timing unknown, Portofino Resources could offer tremendous bang for the buck. Of course, a lot is riding on the drilling at HMW later this year. However, Portofino’s Yergo project is alive and kicking, fighting not to be forgotten when all eyes are on HMW. If management can deliver good drill results, that should enable the funding of both follow up work at HMW and, perhaps, an initial drill program at Yergo in 1h 2020.

The 2,932 hectare Yergo project is less than 20 km from Neo Lithium’s high-grade 3Q project and shares geological features with 3Q. Exploration to date has been promising. For instance, near-surface samples showed good Li values and very low magnesium to lithium ratios. Most projects in Argentina have Mg/Li ratios between 2.5 and 4.5 to 1. The Yergo samples averaged less than 1.0 to 1. The lower the Mg/Li ratio, the less expensive it is to process the brine.

Unlike several companies in the chart below, Portofino has minimal cash payments to make. In fact, between now and the end of 2020 less than US$50K is due, none over the remainder of this year. And, importantly, there are no work commitments or royalties.

In looking at the 13 names on the chart—where their properties are, the number of recent press releases and their cash balances—there are several that I think are LESS likely to survive as lithium juniors with projects in Argentina than Portofino. Yet, Portofino has an enterprise value that’s about 90% below the average enterprise value of [LIT.v, PNN.ax, ULI.v, NGZ.v, AN.v, LEXI.v, GLN.ax and LKE.ax].

To reiterate, many of Portofino’s peers in Argentina have projects in and around salars with fairly recent exploration disappointments (poor or inconclusive drill results, drilling mishaps, etc.). Most projects aren’t being actively explored, especially if a large property payment is due. Many companies are waiting for payment dates, hoping for a sector rebound, before investing any additional funds.

Since Portofino has very low near-term financial commitments, especially compared to peers, (each project is held via a 4-year option agreement), management has been able to prudently advance HMW and Yergo in a very difficult market. In my opinion, based on peer company press releases, only four (including Portofino) of the nine companies in the top section of the chart are actively exploring / developing.

Interpretation of the survey by a local geological consultant indicates multiple zones of low resistivity (i.e., conductivity). Conductive anomalies were found to extend from surface to about 250 meters and extend horizontally for at least 2.5 km (on the Condor concession).

Management believes that a likely cause of the conductivity is lithium-bearing brines. However, until the property is drilled later this year, no one knows for sure. Based upon previously identified, near-surface Li-brine results and the new geophysical survey, multiple promising drill targets have been identified.

Is this news sexy? Is it highly exciting? No. But, to reiterate, Portofino Resources has a sub C$1 million market cap and is advancing two prospective lithium brine projects. Most juniors have very little, or nothing to say. 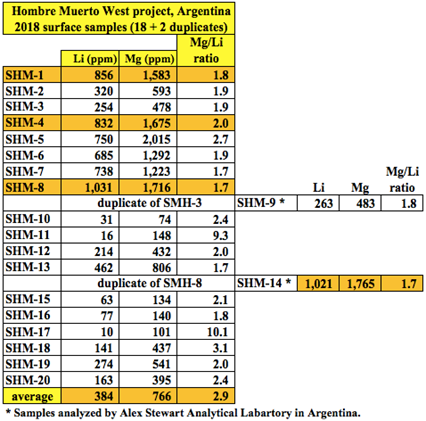 One peer in Argentina has had just one press release the entire year, and it was that a director had resigned! Another has zero project-related press releases so far in 2019. If and when the sector rebounds, many juniors around the world will find themselves 6–12 months behind the companies that were able to advance their projects.

If the lithium sector improves later this year and management can deliver good drill results at HMW, the company’s 24.0 million shares outstanding might be hard to find near the current price of C$0.04. The average share count of the other Canadian-listed juniors in the chart is 90.1 million.

Make no mistake, this is a very high risk situation, but with high risk, there’s often the opportunity for high reward. I believe that an investment in Portofino Resources (TSX-V: POR) (FSE: POT) offers a compelling risk/reward proposition.

Disclosures: The content of this article is for information only. Readers fully understand and agree that nothing contained herein, written by Peter Epstein of Epstein Research [ER], (together, [ER]) about Portofino Resources, including but not limited to, commentary, opinions, views, assumptions, reported facts, calculations, etc. is not to be considered implicit or explicit investment advice. Nothing contained herein is a recommendation or solicitation to buy or sell any security. [ER] is not responsible under any circumstances for investment actions taken by the reader. [ER] has never been, and is not currently, a registered or licensed financial advisor or broker/dealer, investment advisor, stockbroker, trader, money manager, compliance or legal officer, and does not perform market making activities. [ER] is not directly employed by any company, group, organization, party or person. The shares of Portofino Resources are highly speculative, not suitable for all investors. Readers understand and agree that investments in small cap stocks can result in a 100% loss of invested funds. It is assumed and agreed upon by readers that they will consult with their own licensed or registered financial advisors before making any investment decisions.

At the time this article was posted, Peter Epstein owned shares of Portofino Resources and Portofino was an advertiser on [ER].

Readers understand and agree that they must conduct their own due diligence above and beyond reading this article. While the author believes he’s diligent in screening out companies that, for any reasons whatsoever, are unattractive investment opportunities, he cannot guarantee that his efforts will (or have been) successful. [ER] is not responsible for any perceived, or actual, errors including, but not limited to, commentary, opinions, views, assumptions, reported facts & financial calculations, or for the completeness of this article or future content. [ER] is not expected or required to subsequently follow or cover events & news, or write about any particular company or topic. [ER] is not an expert in any company, industry sector or investment topic.

4) The article does not constitute investment advice. Each reader is encouraged to consult with his or her individual financial professional and any action a reader takes as a result of information presented here is his or her own responsibility. By opening this page, each reader accepts and agrees to Streetwise Reports’ terms of use and full legal disclaimer. This article is not a solicitation for investment. Streetwise Reports does not render general or specific investment advice and the information on Streetwise Reports should not be considered a recommendation to buy or sell any security. Streetwise Reports does not endorse or recommend the business, products, services or securities of any company mentioned on Streetwise Reports.
5) From time to time, Streetwise Reports LLC and its directors, officers, employees or members of their families, as well as persons interviewed for articles and interviews on the site, may have a long or short position in securities mentioned. Directors, officers, employees or members of their immediate families are prohibited from making purchases and/or sales of those securities in the open market or otherwise from the time of the interview or the decision to write an article until three business days after the publication of the interview or article. The foregoing prohibition does not apply to articles that in substance only restate previously published company releases.