You can call me lucky if you want, I don’t care. I am only out to become wealthy in the next two years. If you choose to sit out this coming rally you will have no one to blame but yourself, but don’t tell your spouse as they will  surely disown you, if you miss this opportunity. This is Dudley Pierce Baker, the editor of http://JuniorMiningNews.com and http://CommonStockWarrants.com and I believe we are on the verge of a major move up in the resource sector. Timing is everything in the markets and the timing seems to be on our side for resource investors. The next two years are being talked about now by several newsletter writers and even by Jim Cramer (CNBC) as an excellent time to being investing in the precious resource sector. In a few years, some investors will think they are smart as heck when if fact they are just lucky to have been invested in the resource sector at this particular time. So, timing will prove the expression correct, that ‘it is better to be lucky than to be smart’. The important take away for you as an investor is that the stage has been set (bottoms are in and bases built) and the next two years may well present investors with an explosive rally in silver, gold, copper and possibly uranium. Simon Constable writing for TheStreet.com, Why It’s a Good Time to Invest in Copper has an interview with Jim Cramer on Freeport-McMoRan: Prices Are Exploding.   I … END_OF_DOCUMENT_TOKEN_TO_BE_REPLACED 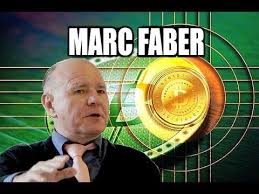 Jay Taylor Media Published on Jul 25, 2018 SUBSCRIBE 3.8K Dr. Marc Faber discusses the global markets as he once did on all major business channels, at Barron’s, and other mainstream print media. … END_OF_DOCUMENT_TOKEN_TO_BE_REPLACED

The Gold Report: You’ve written that the China-led Asian Infrastructure Investment Bank (AIIB) could lead to a boom in commodities. We recently saw that South Korea is joining a number of European countries and signing on, despite U.S. reservations. Do you see this as a threat to U.S. fiscal dominance? Chen Lin: I think this is a first step for China. The country has a huge reserve, $4 trillion, much more than it needs on the balance sheet to stabilize its currency. The rest is wasted, collecting no interest. China made some huge mistakes in the past through poor acquisition decisions because of faulty lending standards. This is a sign that it has learned from its mistakes and wants to make the most of the trillions it has to loan out right now. The bank will operate close to international standards, and because it has many nations involved already, defaulting loans will include less risk. “Pretium Resources Inc. is a very high-grade, low-cost, exciting story.“ This is a test. If it is successful, it can expand to Africa, South America, even Europe and North America. China has trillions of dollars sitting, doing nothing. It wants to find a way to lend money it can almost guarantee to get back and then put the money to use in the form of development. China has a huge infrastructure network capacity, requiring steel and cement. This creates jobs, which is good for the economy. That was the thinking behind the announcement. If the … END_OF_DOCUMENT_TOKEN_TO_BE_REPLACED